This is other information we overheard while we were there. Skaze are the evil seons, and are related to Skai. Seons are related to the AonDor and thus Aona.

Could a seon or a skaze turn into some sort of Shardblade on their home planet?

That is theoretically possible.  They work under the same fundamentals but they would need to have something to pull them more into the Physical Realm.

I recently reread Elantris and I came to an interesting conclusion: that the seons are similar to the spren.

And are they Servitude, broken pieces of Servitude.

So, they are actually broken pieces of Devotion, which is a similar concept, but yes.

And then the Elantrians are based off of Dominion then?

Dominion are the skaze. They are referenced briefly.

Then Hoid talks to them, or--

Hrathen references the skaze in his thoughts. I show a skaze I believe in the extra bonus scene, don't I?

Where Hoid is going to jump into the well?

Yes, there is a skaze there, that's a skaze.

...I'm assuming then, we can look forward to the skaze!

You can look forward to the skaze being involved in things, definitely .

Ashe says to Sarene "your god". Do seons (and skaze) have a religion/god?

They have an inkling of the nature of their original Shards, which they would consider their gods.

Kind of like a first, a prime, a parent?

Yes. They kind of know what happened that created them, and they also know this is not the god being worshiped (by Sarene), so...

When Dilaf is instructing the monks in how to kill the Elantrians, he mentions purification rites that need to be spoken. Do the rites have to do with the Dor? Or are they purely religious/ritualistic?

They are mostly ritualistic, but a lot of what the Dakhor do is strongly influenced by the Skaze. Read into that what you will.

There is a group mentioned at the end of Elantris which has something to do with Skai. 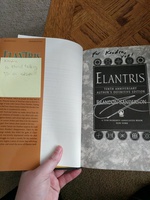 Is Hoid talking to a skaze?

About the end of Elantris. When Hoid is speaking with the dark seon? I was wondering, like, what is that relationship there? Is he, like, working with them, or for them?

More alongside each other.

Is that something we're gonna see more of in the future?

It says that it's dangerous to travel to Shadesmar on Sel. Why?

It has to do with the Dor and the lack of an entity controlling much of the power Odium left in his wake on Sel.

Woah, that's interesting. I had no idea Odium left little bits of his power on Sel... I guess it kinda makes sense for evil monks to be powered by pure hate, though.

Odium did not leave his power behind, one should note. He left several other powers which are now, to a large extent, mindless...

If you wouldn't mind answering, does Roshar have a similar problem, with Honor being Splintered?

No, Roshar does not have the same problem. There are some differences going on. (One reason being that the spren are far more extensive on Roshar, and provide something of a "release valve." The seons and the skaze on Sel are not numerous enough to fulfill a similar function. Though, of course, that's only one part of the puzzle. Raw power is dangerous.

It's one reason everyone should be thankful Kelsier was around on Scadrial.

Is the creation of skaze end-negative?

So, you're not quite using the term right.

The terms "end-negative" and "end-positive" refer to a specific system--in most cases, we're talking about the individual(s) using the magic. Do you draw more magic out, or is it powered by your own native Investiture?

Awakening is what we call end-neutral, despite the fact that (obviously) the Breaths came from someone else in the first place. That's not the point in contention here--do the same number of Breaths (the same amount of Investiture) continue to exist in the system as you're manipulating the magic.

In something like AonDor, you are drawing out much more power than you put in--end-positive. That power is put to work doing something, such as healing a body, or creating a blast of power.

The skaze, like the seons, were created when a Shard was Splintered. The terminology doesn't quite work there, at least not in the way that scholars in the cosmere would use it.

The question from the physicist in this thread about where Investiture goes, and what it means for a Shard to have access to certain amounts of power, is related to all of this. I'm hoping to be able to find some time to craft a response there, as there are some fundamental understandings of the magic that are relevant to the discussion that I should point out.

Was Wyrn's drive to topple Elantris purely a typical, conquest-related motivation? Or did it arise after Fjordell gained access to the Dor?

The Skaze have a large amount of influence on most politics and most working in Fjordell.

(Oh, and if you caught the reference to the word "skaze," then good for you. The skaze are a group that will appear in the sequel, when and if I get around to writing it. They're pretty much evil seons.)

You've said that Seons and Skaze contain splinters of Devotion and Dominion. Were these splinters created when Odium killed the shardholders and Splintered their shards? Or are they more similar to how Endowment splinters himself (herself?) to make divine breaths? What is the difference between the two?

First, he said that it was a very good question. Then he said that those splinters weren't supposed to be there, and they were indeed created when Odium splintered the shards. He said that the difference lies in how each magical system works. Endowment's splinters are more similar to how Preservation invested a little bit of her shard into each human on Scadrial.

(indistinct, about Hoid and the black seon)

[Does] the expansion of Jaddeth’s empire have more to do with greed and hunger for power, or the innate nature of Dominion?

Both. I would say both. The innate nature of Dominion probably caused the greed and hunger for power.

What would you say percentage-wise?

Well, one caused the other. It definitely started with Dominion. The Skaze are pretty thirsty for power.