I noticed in Dragonsteel that the Sho Del use silver sheathes and that stuck out as an atypical material for an ancient technology scabbard, does the metal hold some kind of significance within Sho Del culture?

This was done intentionally, and will probably still be a thing when Dragonsteel enters canon--but that's a LONG ways away, so don't read too much into it for now. 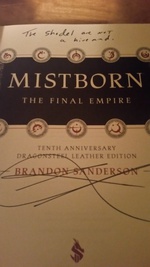 Are the Sho Del hordlings and/or a hivemind?

The Sho Del are NOT a hivemind.

You've once said that there were three sentient species on Yolen: Human, Dragon and [Sho Del]. We've seen a lot of 'people' on the different planets that were either descended from or intentionally based on humans. Frost is known to be a dragon.

Are any of the non-human species we've seen descended from or based on either Dragons or [Sho Del]?

What colour is Frost's blood? What color is a [Sho Del]'s blood?

RAFO, more because I'm not ready to canonize Dragonsteel facts yet, as opposed because it will be a huge revelation.

In The Lost Metal, we find that Sho Del have four arms, making six appendages. In the [sample] chapters for The Liar of Partinel, we find that a fain deer has six legs. Is this pattern important?

Further, how relevant to this is [it] that if you count four legs plus two wings, dragons have six limbs?

Yep, that is the exact correlation that I would like you to draw! Dragons are fain, if you're wondering. If that's what the question is, yes, dragons are fain.

For a hardcore fan, one clue you'd give out... [About] Hoid, or Dragonsteel, or Restares.

...The problem is, so little of Dragonsteel is still canon. I've pulled so much out of it.

The Sho Del are still canon, and Hoid has an interesting relationship with several of them.

Would Sleepless be the 3rd race native to Yolen? Man, Dragon, and Sleepless?

The Sho Del are the third race from Yolen.

I've heard you mention the Sho Del a few times, though only that they were the third race on Yolen. Is there anything else you could reveal about the Sho Del that's not too spoilery?

The big thing happening on Yolen (and major plot points of both Dragonsteel and The Liar of Partinel, neither of which I decided to publish) is two competing ecologies on one planet. An entire invasive ecology (called "fain") and the regular one, familiar to us. The Sho Del fill the niche in the fain ecosystem that humans fill in ours.