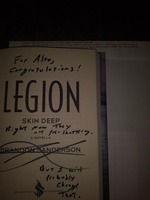 Are the Aethers from one of the Shards that we know? Or are they of a Shard we haven't learned about?

Right now they are pre-Shattering.

But I will probably change that.

Are there still six different types of Aethers in current canon? Or has that changed?

They have expanded. I’m using the Aethers behind the scenes for a lot of space age things. And because I’m doing that, I am adding in a few more Aethers. There’s going to be some limits on this. I’m tweaking which Aethers I’m actually making, ‘cause some of them didn’t work as well as other ones.

There will end up being more, but I won’t canonize the number until I have the Aether book ready to release.

Aether, is that how you say the book? ...Aether of Night? Is that going to get published at some point?

I will probably bring that into the mainline Cosmere. Right now, it's not in continuity because I've changed enough things about the way that Shards work, and things like that. The aethers themselves are in continuity. Mraize has some aether-- some bits of aether, in his little collection. They are in continuity somewhere, but I haven't dropped them into the actual continuity.

Something I've been curious about: will Liar of Partinel be released as a Sanderson Curiosity eventually? I noticed that in the stream a while back where you listed your unpublished books, you didn't list it among them.

Also, you gave four approximate sort of "quality tiers", of

Which tier would Liar be in?

Liar would be #2, I'd think. Problem is, it's close enough to continuity (having been written after I'd outlined the cosmere) that I wouldn't want to actually release it until after I've done the actual Hoid backstory book. I've changed some dramatic things about how I want to present the story, so it would be bad to release this one.

We've reached a point where Dragonsteel, however, wouldn't be a spoiler. So I'm tempted to release that one in the next kickstarter. I've been kicking around the idea of an actual revision of White Sand, to make it publishable, and release that as an actual canon novel. It's the only one that could happen to.

Does this mean there is no chance of a canon version of Aether of Night ever being published? I really enjoyed it and think a fully polished version would be fantastic.

It is unlikely, but not impossible. Aether could be made canon with only slight changes--but it doesn't fit into the larger cosmere story any longer, so I don't know of how much interest it would be.

To clarify, you're referring to the actual Aether of Night novel, not the future rewritten Aether books that you've mentioned before, right? Or are those not likely anymore either?

Since Aether of Night could be canon with slight changes, I assume the Aethers in the book will be mostly canon as they are, at least in your current outline?

If you were to revise Aether to be canon, would you be replacing Ruin and Preservation with two other Shards, or would you be more likely to just remove Ruin convincing the Twins to imprison Preservation?

Future Aether books are very likely. And the aethers themselves are going to be very like the ones in the book.

If I did try to make it canon, I'd probably remove the whole Shard plot from the book and instead either use another Shard, or not add a new one, since the Aethers (as I have them now in the notes) function without a Shard's involvement, and even predate the shattering. (Note, that's not yet canon.)

Aether of Night was cannibalized; it's no longer going to be released. Apparently some of the concepts were taken and worked into other books, so it's no longer publishable.

Actually it might be un-cannibalized. Some concepts went into Liar of Partinel, but now that book won't ever happen in that form. So there could still be one or more Aether books in the future. But it would be a ground-up rewrite like happened with Mistborn and Stormlight.

Wait, really? That's pretty big news, even just possibility of it happening. I presume the Shards of the world would change then? Since Decay got reworked to be Ruin and such?

Yeah, Decay is essentially Ruin, so lots of things would change there. But the magic of the Aethers, especially, could get their own book later.

There is a reason that Aethers are already canon. I don't think anyone has figured that out yet. But the backstory Brandon gives them could change in the future, or could end up never materializing.

Any news on an Elantris sequel?

No news. I want to do this between Mistborn Era 3 books, is do some Elantris. But I'm gonna have to see how things play out in writing those books. It depends on a lot of factors.

I do plan to do them, still, just like I plan to do one Warbreaker sequel. But I have to balance these things, because I also want to do some new stuff in the cosmere, with new planets. Like, we need to do the Aethers. They're relevant to space-age cosmere, so I need to have at least a book or some novellas to get you used to that magic system, as well.

Obviously the Shards are the top dogs in terms of power and stuff, but Hoid seems to be his own level of dangerous. Are there any other characters as sort of rivals to his ambition or power?

Depends on how you want to express it. Some of the dragons from Yolen are as old and are very crafty. You could argue that the aethers, the actual core aethers, are as ancient and potentially powerful. I wouldn't put them by raw power at Shard level, but they would claim that they are. Depends on what you would think there. There are some other individuals of a similar, not as dangerous as Hoid, but on a similar level. Been around for thousands of years, investigated a lot of the magics, and these sorts of things.

Aether of Night, aethers also show up in Liar of Partinel...

Is there any significant relationship between the twelve types of aethers and the ten essences on Roshar, even just in a sense of recurring cosmere-wide patterns?

I would say yes, but it's tenuous.

What are your current thoughts on Silence Divine? The setting and magic are some of my favorite to visualize so I'm always crossing my fingers you'll want to do something with it. It just hits all the right checkboxes for "cool" and with Dawnshard's release, well I was hoping it might be on the radar...

It's on my radar, yes, as are the two other Cosmere novellas I want to write. (A sequel to Emperor's Soul and one to Sixth of the Dusk that I've actually started.)

Problem is, it's hard to find slots for these things. We'll see. Not forgotten, certainly.

I don't know why, (an old WOB?) but I thought we would only be dealing with Sixth in the background from now on, so a sequel is awesome to hear.

The Sixth sequel is him exploring Shadesmar. I have a scene done, but it involves some pretty big spoilers for space age cosmere, as within a few years of the story that happened, there is a lot more going on in relation to other worlds. So I'm not sure if it's wise to continue it at this point.

I know I'm a minority in this, but I love normal humans in a magic world. While Sixth has no investiture, the world is still fantastic and has the air of mystery.

Will we see other cosmere settings where the people don't have magic, but the world does, like in Sixth, and shadows?

Yes, you will see more like this. (Many of the settings that involve Aethers can be like this, for example.)

Are the aethers native to multiple worlds?

Currently, no - but they have spread + they claim to be not from any world.

Yeah, it splits really nice on a table. When I was developing the Cosmere in general, I was looking for... the division of multiples of 2 is just so much fun for designing things like the Allomantic Table. You can do that with 10, you can do that with 15, yes. I find aesthetically pleasing the way that 16, 8, and groups of 4 work, and that's how I arrived at that number.

I also did have some kind of boundaries on myself. I needed it to be a large enough number that it could cover the full group that I wanted to do in Dragonsteel, but it had to be small enough that people could track them all. 16 is a little on the high end for that, but doable, I believe. Particularly since you really only have to track all 16 when I write the Dragonsteel stories. (You'll really have to track 17 because we have Hoid, who did not take one.) But lately, you have at least one of the Shards being combined, and others of the Shards no longer being relevant to the course of stories, and things like that. So you won't actually, in the future, have to track 1.

But it was a nice number for what I wanted to do; not too big, not too small, and I liked how the divisions broke down. And I knew I was going to do 10 with Roshar by that point. If I was gonna pick 10, I would have to use 10 again in Mistborn, which I could do, but I wanted to have different themes. I wanted their tables and math to look a little different visually on the page, since they were two pillars. So 10 and 16 felt like the two good pillars. The Aether world is a 12 world, so we'll have a 12 also. The Aether world does not play into things nearly as much, but it'll depend on how many books I write using the Aethers in the future.

Will we see Aether of Night eventually?

I can't promise. You've seen the aethers; Mraize's room of trophies. But I can't absolutely promise I'll work it in... The question is, if I find the time. I just stay consistent on the mainline Cosmere books. If I find the time, I'll get Aether of Night.