Are the Ire old enough to have gone through the Reod?

Did the Reod coincide with the Recreance?

These two are not at the same time, but good question.

What year did the Reod occur in the Elantrian calender?

What caused the Sel earthquake? Could it be the fall of a Shard? Ambition? Will we see the Ire again?

What happens to seons during the Reod is that the Reod messes with the seon's spirit. 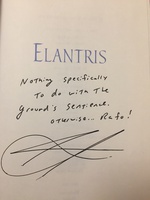 Did the earthquake have anything to do with the grounds sentience?

Nothing specifically to do with the ground's sentience. Otherwise... RAFO!

How significant of an event or time period, on a cosmere scale, was the Reod actually? 10 years seems like a blip. Do most worldhoppers even know about it?

It was a big enough event that by now, yes they do. Most worldhoppers, actually no. Because most worldhoppers are going to be common tradespeople, things like this. Running caravans from Roshar to Nalthis or things like that. The majority of them are not paying attention to things that are happening, so I'm gonna say the majority wouldn't. But the arcanists, the people who are watching the various magic systems, who know about the Shards and are paying attention to this, what happened on Sel was a big deal.

Why aren't seons affected by the lack of a chasm line in their Aon?

If they tried to actualize their Aon, it would have an undesirable result. In addition, the chasm broke their bond to the humans they were tied to, and you can see the result of that. So they were affected.

Are we ever going to know what caused the chasm line in Elantris?

You will, hopefully, learn a little bit more about that. Not huge amounts. What I’ve said before in the past is that the cause and effect is mixed up. And I can’t say more without giving away spoilers. But cause and effect is mixed up in that world in that event, specifically. We will learn a little bit more. There are some events surrounding it that are interesting. Hopefully, if I can ever get around to writing Elantris sequels. I can’t even 100% guarantee that that will go in there. But it is planned to go in there, now.