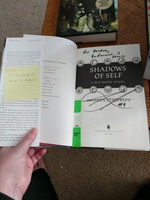 You're going to make me. They're trying to get me to canonize Endowment's gender. *crowd goes oh* ...Yes I have... I'm going to look at the thing that you guys would just love to see--

So now's not the time to snatch that?

It's encrypted, we've been developing a language that only we can read. *laughter* It's all in glyphs.

Is it in the women's script?

Should we get Mi'chelle over here?

It’s in a language that will never be decrypted...

I can't find-- Karen must have moved this. I have the name in here. I haven't canonized the name either have I?

We don’t know. You can put that information on there too.

Yeah but Karen moved it.

People have guessed that it's Edgli but..

I think it’s gotten RAFO'd before...

There you go. You guys got two big ones out of me.

In the past we deeply discussed the mechanism with which Breaths are decided to be doled out or endowed on Nalthis. And you said that there is an intellect that is doling them out, but that their intentions or that their goals are difficult to predict or nonstandard. And my question is: are they nonstandard because the base Vessel behind them does not have, at its core, a standard human psychology?

RAFO! Good question. Excellent question. RAFO, I like the way you're theorizing. I have said before, that there are multiple nonhuman Vessels in the Cosmere. So, your theorizing perhaps is going to bear fruit.

Did someone say "chulls"? No, it's not the chulls. There are no chulls that are holding Shards in the Cosmere.

Excuse me, the E of Edgli is pronounced like E of Echo, or E of Egypt? Or else?