Are the "magic fish" of the Purelake the result of symbiotic bonds with spren?

Yes they are. Many creatures on Roshar have such interactions with spren.

I asked for something about Honorblades that we don't already know.

One Herald (other than Taln) kept his Honorblade (or, at least, took it back) 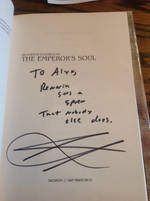 I asked for some new info about Renarin, and this is what Brandon wrote to me!

To Alyx, Renarin sees a spren that nobody else does.