Demoux. Him, also being in the Interlude. How is that one...

He is part of a group called the Seventeenth Shard. [They] are cosmere-aware and travel around the planets and have a kind of pact of non-intervention. Which they aren't doing a very good job on, because they brought the common cold to Roshar.

How did he actually find out about this?

I will give you [a RAFO card], because I will answer about the Seventeenth Shard eventually.

So all these questions are actually going to be answered?

The Seventeenth Shard will have a big role to play in future books.

Hoid is not part of the Seventeenth Shard. They're trying to chase him down.

What are you willing to reveal about the Seventeenth Shard?

The three guys that you meet in Ishikk's interlude are all from the Seventeenth Shard. And it is an organization of people who about... They aren't convinced that what Hoid is doing is what he should be doing.

Is Sazed the "Seventeenth Shard", as referred to in the epigraphs of part two of The Way of Kings?

Sazed is not the Seventeeth Shard. Whether he's IN the Seventeenth Shard is another question. It is an organization.

How does the Seventeenth Shard feel about what Hoid did to Sigzil?

They think it is further proof that Hoid is a monster and needs to be stopped.

Are the Ghostbloods and the Seventeenth Shard working together?

The Seventeenth Shard was looking for a certain individual on Roshar. Have they found him yet? Or, what are they doing?

We will catch up to those three at some point, I hope, and find out what they've been up to. They kept looking in the wrong countries.

What's the intent of the Seventeenth Shard.

That has not been revealed yet.

Is the Seventeenth Shard based in Silverlight? Like their home of operations.

Will Thinker+Grump appear again? Or is this a RAFO?

They will appear in the cosmere some day again.

Is the Seventeenth Shard a fairly recent organization (in relation to the published books), or have they been around for a while?

Is there ever gonna be a book dedicated to the Seventeenth Shard?

How aware is Odium of the Seventeenth Shard? Hoid mentions that he has to be careful to keep his head down as he doesn't want Odium to catch him. Given the history between the two that makes sense, but would Odium have the same policy for the Sharders, or does he not view them as a threat?

In Way of Kings, there was an interlude, you've got the three guys that are looking for Hoid. They're in that crazy town with the water. Who are the guys? And are we going to see them again?

So, one is Captain Demoux, from Mistborn. One is Baon, from White Sand. And one is Galladon, from Elantris.

Are we gonna see them again?

Yes, you will see them again. And if you watch really closely, you can pick out Galladon by, he speaks in Dula. So if you watch for the quote in Dula. But the other two, you wouldn't be able to pick out.

They are chasing a false lead, which is just very amusing to Hoid that they think he's over there.

Is the Seventeenth Shard meant to represent a specific Shardic intent?

The Seventeenth Shard has a specific purpose, and the name was chosen very deliberately.

I see Shai as one of the founding members of the Seventeenth Shard trying to hunt down Hoid. Is there any--

The Seventeenth Shard—is their purpose limited solely to tracking down Hoid? Or all Worldhoppers or is it something grander than that?

No, they have other stuff. It is grander than that.

He's just one of many priorities?

Yes. They are very worried about what he's going to be doing.

But there's others they're worried about as well?

Yes... They have a task, they have goals, and they are worried that he is going to be [at] cross purposes to them, so is trying to hunt him down.

Did Kelsier help in the search for [Hoid] that Galladon and Demoux were doing in the Purelakes?

He's the only one that can call him something similar, like "Drifter" so -

He has an aura that fits in with-- 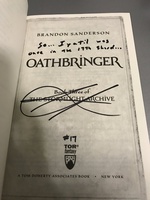 [Can you write] something interesting about the Seventeeth Shard? ...Or how about this, a character that's in the Seventeenth Shard that we don't know about?

Would the Ghostbloods try to recruit [a Sleepless]?

Um, the Ghostbloods would not trust a Sleepless.

They would not. They would expect a Sleepless to take over their organization or try to. And try to stay far away from the Sleepless.

What about the Seventeenth Shard?

There are members of the Seventeenth Shard who would be interested in recruiting one of the Sleepless. Generally they represent a wildcard faction that a lot of other people are wary of.

I guess Khriss and them just know about them?

Yes. The Sleepless are cosmere-aware.

There are Sleepless on many planets. They have mostly settled on Roshar for various reasons.

See *inaudible* and other signings that Hoid had both long life and lived through time when we was worldhopping, how about other members-- or not "other," just members of the Seventeenth Shard? Like are they time travelling or they have long life--

It is a mixture of both. Either, or, and.

And the RAFO question: where did they get it from?

RAFO! There are many methods and there is no one method, and you know some of them already.

Are there requirements to join the Seventeenth Shard, and would they accept, for lack of a better term, a non-enhanced member?

They do like what Khriss is doing, alright? This is an acceptable thing to them.

...What about when people start integrating themselves with a culture, is that gonna make problems?

They would prefer that people didn't do that.

Not Va-- Vasher is very far from being Seventeenth Shard. *laughter* So very far.

Would you say they are a community of scholars?

They are a community-- They are not all scholars, so I would not say that. I would say they are interested parties who do not want any planets to get destroyed.

So they're the Apocalypse Guard? *laughter*

No, they aren't really able to prevent these sorts of things. They're more like the-- Oh what do they call them in DC? The Watchers? ...But those guys are super powerful and stuff, so it's not like that. But you can imagine it's something like that. "We're watching, we're studying' we're investigating, and we're trying to prevent-- ...They're like Starfleet, right? They've got some Starfleet stuff right? "We're gonna go research and study these people, but we shouldn't be involved." It's less about Prime Directive, and more about "What if something we do causes-- exacerbates the conflict between the Shards." The Shards split up for a reason, is what they think, right? Shards split up for a reason, they should continue to be split up, we should not dabble in bringing them together.

Did Demoux achieve immortality by manipulating his Connection age?

Demoux uses the same method as most of the Seventeenth Shard. That method slows aging by a lot, but doesn't stop it completely.

In The Hero of Ages, Demoux gets together with a woman named Aslydin. He's then seen on Roshar in The Way of Kings. Knowing how loyal Demoux is, he wouldn't just leave Aslydin behind like that. Is she connected to his reasons for becoming a member of the Seventeenth Shard?

Aslydin is in the Seventeeth Shard, and had her own work to be about. I've given subtle clues about her before, but the ethnicity of the name should strike you.

Is one of the guys that is looking for Hoid in the Purelake Galladon from Elantris?

You’ll have to find out. He’s part of a group called the Seventeenth Shard, who have kind of been recruited from different planets.