Are you going to write a sequel to Sixth of the Dusk? 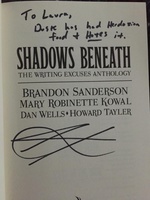 I asked Brandon to include some interesting larger-Cosmere-related tidbit about Dusk.

Dusk has had Herdazian food + hates it.