How much of Defiant has been colonised by humans? Do the caverns cover the entire world, or are they restricted to only a small area around Alta?

You're seeing the most populated part of the world. There are some little enclaves all over the planet (which is smaller than earth) but most everything is congregated near where the original fleet landed. (Note that the Defiant was the name of the flagship they crashed on, not the planet's name.)

Does Detritus have a sun or a moon or something?

It does have a sun but it has no moon.

Skyward question: What actually IS the proper procedure if you think a vat of algae might have been contaminated by a coworker?

Ha. That's one I didn't think I'd get. You'd get your superior, prevent any blending between the vats, and record in a form exactly what the contamination would be. They're not worried too much about sabotage. This is focused on sanitary food-preparation ideas.

Spensa has this habit in citing "X is one of my ancestors". Is it possible that sometimes she has actually right ? Regardless if this lineage is relevant to the story.

Spensa comes across as overconfident and bombastic at times, while her AI sidekick, M-Bot, is both comic and tragic. What else can you tell us about developing characters?

They really play off one another. With M-Bot, I needed both a friend and a foil for Spensa, since there's a lot of conversation between them. I also needed an outside perspective. Spensa's culture has problems. Humankind crashed on this planet decades ago, and has been subject to these alien invasions and air raids for so long, that their entire society is built around the machine of war to protect themselves. The technology and temperament revolve around getting pilots into the air at all costs, and it’s skewed everything as a result. I needed an outside voice to ask questions and raise concerns, even if it's through humor.

Because Spensa is such an extreme character, one of the challenges was to depict that a person who's spent most of her life alone, hunting rats, while imagining herself to be a great warrior, is going to have a warped perspective on what it means to be a fighter pilot, weirder than the rest of the society might.

In a way, she's a stand-in for someone like me, who enjoys larger-than-life action movies but has never experienced real violence. She’s like the person in the seat with the popcorn, who’s confronted by the reality and discovers it’s not what she imagined.

Are the rats that Spensa eats actually rats, or is this a Rosharan chicken situation?

I made them actual rats.

Are they native to the planet?

They are not native to the planet... They predate her people crashing on-- There were humans on Detritus before, when it was not called Detritus. 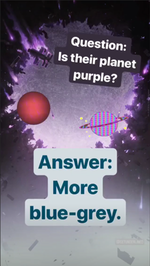 Is their planet purple?