Hey, now that the Hemalurgic Table is out in the world, can we get a normal image of it on the website so we don't have to rely on photos from people's books? :)

Eventually. I'm working on the actual final version that will wind up as the art print. I don't want to release a digital version until it's the final one. 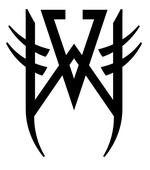 Thought I'd just get this out into the world since I hadn't yet: The Feruchemical symbol for Harmony.

Ah, so I am not the only one who thought they looked like fangs

I was looking to the Feruchemical symbols for lerasium and atium for inspiration. Thus the sort of fang-like projections. :) This is starting to look very Decepticons to me...

So cool. The symmetry is perfect. I also love that you can see elements of the symbols of lerasium and atium in it.

That's exactly what I was going for. Glad you saw those symbols in there!

Hey, you say Harmony do you mean harmonium? As far as we know, we only have symbols for metals, not Shards

The symbol for Scadrial (at least among the Cosmere-aware) is also the symbol for Harmony but will probably also be used for Harmonium. It was a mashup of the other god metal symbols. It was natural to make a symbol to fill this void in the Feruchemical symbols as well.

Was this on purpose or is it an accident? I can see both the symbol of the Chalice and symbol of the phallus in this, is this a sign of him being an Eunuch?

Rare to see symmetry in Feruchemy glyphs; does that reflect Harmony's "balanced" nature? Or perhaps an implicit connection to Roshar's glyphs...?

Harmony's symbol was symmetrical and balanced in its Allomantic form, so I decided to carry that over in its Feruchemical form. No relationship to Roshar's glyphs. :)

What was your favorite idea for a story that you realized you'd never be able to write? (say, due to not enough time, not a larger enough market, too difficult, etc)

The story that keeps eluding me is the one I've often referred to as "the Silence Divine." It's a story about a world where bacteria and viruses have a symbiosis with the magic, and grant powers to people who catch associated diseases. For example, if you get the common cold, you might be able to fly - but only for the period of time when you're sick.

I think the magic system is cool, and I have a great idea for a plot. (Weaponized antibiotics as a method of bringing down society's ruling class, who are people who have a persistent disease that gives them powers.) But I haven't been able to make it work - part is the knowledge that I need to know more about immunology, and theories of diseases spreading, before I can really do this story justice. (For example, figuring out the balance between the ruling class's disease, their powers, and making it something that could be cured through use of antibiotics administered like a poison.)

The other issue has been time. Stories like the Stormlight Archive dominate a lot of my time, making smaller-scale novellas (like this one would likely be) difficult to squeeze in. I only have so much time for them, after all.

Good question. The answer is no - there is no path through our universe to the cosmere. It is another universe, another dimension, where the laws of physics are different from our own. I don't intend to ever connect the cosmere to Earth or our universe - in fact, one of the big decision points so far in determining if a project is going to be the cosmere or not is whether or not I want to link it to Earth in any way.

Is there an official cosmere coloring book? I feel like this should be a thing.

I've been investigating this possibility and already have an artist interested if everything lines up nicely.

Don't suppose you're flying by Leeds while you're jetting around Europe? I'm guessing Stephen Leeds is named after Leeds after all!

Afraid not. (Though yes, he was. I was traveling in Europe when I wrote the first Legion story.)

Is it true that you invented Nazh?

Brandon and I invented him together. I kept calling Nalizar from the Rithmatist "Nazrilof" until the name became sort of an in-joke. When we needed someone to collect ephemera in the Cosmere, Nazh was the perfect choice.

He's one of my favorite worldhoppers. Here's hoping for a novella or something to tell us about his background in the future.

Glad you like him! There are tentative plans for some Nazh stories. I don't know when they'll happen. But we do hope to bring you all his backstory at some point!

I’m now extremely anxious to see the symbol for Hemalurgy.

We considered creating these but soon realized that Allomantic symbols were probably used by Hemalurgists and actually might've been Hemalurgic symbols before they were Allomantic. (See the little nails sticking through each symbol?) Feruchemy, though, needed something different.

Given the rather dark and arcane nature of Hemalurgy, it does make me wonder if Rashek simply co-opted it’s symbology for Allomancy, given the quick spread of Allomantic powers during his rise and reign and the need for classification.

Is there a single Alomantic symbol for “survive” or would it need to be spelled out?

It would need to be spelled out. The Elendel Scadrians have an alphabetic system rather than a symbolic system.

How did Vasher give his Breath to Denth and not die? He's Returned, so if he gives away his Breath, he dies, right?

Vasher is capable of some things that most other Returned don't live long enough to figure out. We'll go into details in future books, assuming I get to them.

And if so, how exactly can a Feruchemist store Investiture? Wouldn't storing Investiture create a kind of paradox?

I promise to explain eventually. This one is meant to be a little confusing.

Out of interest, were you to go to the Nightwatcher what would your boon and curse be?

Probably the ability to think of stories, but the inability to turn it off... (Hence the insomnia.)

How did Lopen suck Stormlight in WoK? I assumed that as a squire he needed Kaladin to be around in order to practice his abilities.

We're playing a little loose and free w/timeline there. Peter asked me about this, and we determined Kaladin was close enough by the point this happened--though I can't remember if that was because Kaladin was on his way back, or if the distance was just naturally close enough.

Finished the final (hopefully) outline of the Stormlight 4 flashbacks, and just started writing them. Trying a hybrid of Venli and Eshonai flashbacks, instead if just Eshonai. We'll see how it works.

All right! Flashbacks for Stormlight 4 are done. Split between Eshonai/Venli 13 chapters, 30k words. Longer than I'd wanted, but needed to do both. Still another 100k+ to write on other parts.

Are we ever going to get Glyphs that represent the 3 Shards on Roshar?

This is a very intriguing question, one that I've written down for future contemplation. Thanks for the food for thought!

Will we get the poly triangle we deserve?

I could see a world where Shallan and Adolin would go for it, but Kaladin is as prudish as I am, so I doubt you'd persuade him. :) For now, we'll have to leave that to the imaginations of the fanfic writers.

What about The Lost Metal?

Should be soon. It and Skyward 3 will be my next projects, to be done before I start Stormlight 5.

Warbreaker sequel plans please? I'll get my fill with the 10 year anniversary edition, but I'm itching for more. Thanks!

I plan to get to it--but not until Stormlight 5 is done. (Sorry.)

Is there, or will there at some point be, a glyph to represent ‘the answer’ to the most important step a man can take?

I suspect a two-word glyph pair for the answer could work, though I don't think we have glyphs for those two words yet.

Will we ever be seeing an ancient Scadrian symbol for harmonium/ettmetal. I know it didn't exist back then (as far as we know!) but many fans use those style of symbols to represent Hemalurgy.

I don't think we'll see an official version of the ancient symbol for harmonium anytime soon. I believe, in-world, that the Hemalurgists use the Allomantic symbols for the metals.

Are we gonna see an accompanying Khriss essay [for Nalthis] anytime soon?

I suspect it will be awhile. Sorry.

So should we *not* read into the colors [on the Warbreaker leatherbound Nalthis symbol]? Or are Tears of Edgli purple and yellow? (and some black?)

Oh wait, they come in several colors of course. Nevermind.

Yeah, don't read into the colors of the symbol. :) That's just what looks good on the leatherbound.