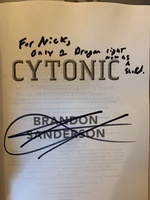 Is there more than 1 dragon amongst the Shards? If so, how many are there?

Only 1 dragon right now as a Shard.

Rayse (Odium) was very methodical with the order in which he went after other Shards. Hypothetically if he'd visited the Rosharan system all those years ago but managed to avoid being trapped and was able to continue his mission right away, which of the known Shards would've been next up on Rayse's hit list?

He expected Ruin to implode. So he might have gone for Autonomy, double crossing them.

Are there ten metals (and their respective alloys) that can be used in fabrials? The eight allomantic pure metals, silver, and then one more?

Do those consumed by Yelig-nar (like Aesudan, Amaram) appear briefly in Shadesmar after they die, but before they pass onto the beyond? 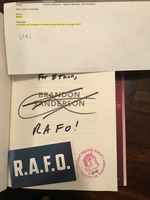 Are there any truespren currently around that are in a singer form?

Back before the Final Ascension, if you had a full Feruchemist and a Mistborn, both with access and knowledge of all 16 metals, could they make medallions without the use of Hemalurgy?

If they knew what to do maybe. Much easier with Hemalurgy - but it would be possible.

Are the aethers native to multiple worlds?

Currently, no - but they have spread + they claim to be not from any world.

Hoid should not be a Rosharan and Yolish Lightweaver, as it's getting close to something related to Dawnshards.

In Secret History, we have the Connection orb that Kelsier uses that draws Connection lines from him to things around him. If Vin (Well of Ascension era Vin) used that orb and also like drew in the mists, could she steelpush on non-metal objects?

The "Crown, Tower, Spear" Death Rattle has not happened yet, either on-screen or off-screen.

We know Rosharan lightweaving is similar to Yolish lightweaving, and we learn in RoW that Stoneshaping may be a gimped version of microkinesis. Are there other surges which are modified versions of Yolish magic?

Are there other godmetals that non Mistborn can burn?

So Renarin is not a normal Truthwatcher, whether you want to use the term Corrupted or Enlightened. Is he the first of his kind?

No, I don't think any of the shards are inherently good or evil. Ruin can be and was for many years presented as the necessary force of progress. Things need to decay in order for life to exist. Entropy is a necessary aspect of life. Ruin doesn't have to be evil but Ruin is hard to control and Odium is even harder. Because of that there is a higher likelihood that Ruin or Odium are going to be very dangerous if left unchecked

Theoretically, with enough Stormlight could a Bondsmith bond a Shard to something?

Could Navani, when she progressed far enough in her Oaths, open a perpendicularity?

Yes, that is theoretically possible.

What is Hoid's best held secret?

Hoid is his own Best Secret.

Use the Falchion (paraphrased)

Are Soulburner and Starburner the same project? And can you give us an update on either of of those, if they are?

Things are going well, they are the same project, and it's NOT up to Brandon to talk about.

Use the Falchion (paraphrased)

I asked Steven Bohls if he and Brandon have any cool ideas for the next Lux book in terms of cool settings or cities.

He mentioned that Book 5 will most likely be set in the New Orleans bayou/deep swamp area. (Or at least that's what he'd like.) It will most likely be a shorter book, at around 100k words overall; and there's a good chance that Mizzy will be a major POV character in the next book. Fun fact - Mizzy was supposed to show up in Lux, as Jax was supposed to go from Boston through New York, meet Mizzy and see Regalia flood the city, and then end up in Texas. This part ended up being cut as it was too tangential to the story. (Wingflare's original gimmick was going to be sound and a sound effect, but this was cut - as were most sound effects - as it felt too much like a gimmick.) Brandon currently wants Lux to be a trilogy, and the second book in that trilogy may be released sometime next November. (The two have ideas, but they were waiting on some sales reports and contract stuff first, and that may have just arrived this past week.)

Dan is writing the novelization of Dark One at the moment. It's not following the outline, so don't expect it to end up like the graphic novel (sadly). Dan is planning on this being about a 100-120k novel overall.

Can you tell me something new about godmetals, something that isn't known or isn't widely known?

I can tell you this: the existence of godmetals is one reason why metal is so weird in the cosmere.

Creating the Hemalurgic table in its final form. Will be creepier and released next year.

Use the Falchion's report - 17th Shard

17th Shard - Use the Falchion's report