I found it! This is what was in my notes for the colors of the miasma: iodine, bromine, acytylene, ammonium hydrosulphide 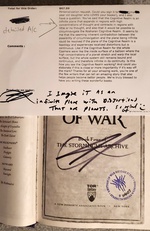 You've said that the Cognitive Realm is an infinite plane that expands in regions with high concentrations of thought and contracts in regions with little or no thought, and also that it would be possible to circumnavigate the Rosharan Cognitive Realm. It seems to me that the seeming inherent contradiction between the possibility of circumnavigation and the plane being infinite could be resolved if the plane of the Cognitive Realm is a topology and experience localized distortions but is continuous. Like if the Cognitive Realm for the whole Cosmere were like the the inside surface of a balloon where the high concentrations of (thought) of a planet stretch and warp the local surface, but the whole system still remains bound and continous, and therefore is infinite in its continuity. Is this how you see the Cognitive Realm working? And could you elaborate if this is close or more importantly if it's way of the mark?

I imagine it as an infinite plane with distortions that are planets. So kind of.

Also, slug types which are not really revealed as a big deal and probably we should have come up with/used them sooner: hyperslug (yellow), boomslug (red), commslug (purple/orange).

On the elves--I wanted to give them a setting inspired by Valenwood, which has cities built on trees that move around. Brandon suggested I plant them in acclivity stone and set them in the atmosphere.

What was the collaboration process like? Did you each work on the same scene/chapter? Do you each take a chapter? Some other way of collaborating that I can’t think of?

So I wrote virtually everything.

Then I submitted outlines. We tossed those back and forth. I wrote a first draft and Brandon gave me a redline edit.

Then I did a revision,  we went to beta and line edit with my editor, I did another revision, then final copyedit.

The one thing I’m a little confused about is how the [UrDail] managed to evolve either separately on different trees or get from tree to tree with the miasma.

The assumption I can come up with is that the trees float and would occasionally bump into each other, letting flora and fauna spread. 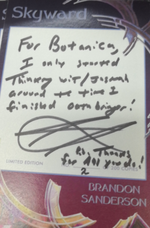 How long have you made up your mind to write Jasnah having relationship with Hoid? Was it settled at the very start?

I only started thinking Wit/Jasnah around the time I finished Oathbringer! 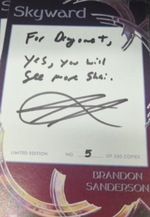 Will we ever see another Shai story? I really want to learn more about her.

Yes, you will see more Shai. 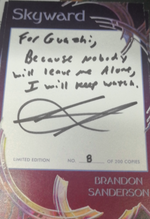 If for some reason Davriel had to join the Gatewatch, what oath will he take?

Because nobody will leave me alone, I will keep watch. 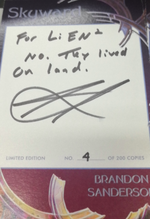 Did singers live in the sea pre-Shattering?

No. They lived on land. 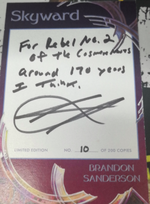 How many years was M-bot in the cave?

I am so excited for this...and a Steris point of view! Oh Steris, how do I love thee? I think I will make a list.

Why was Mare sent to Hathsin if she was a Mistborn and [Inquisitors] could make from her [a] new Inquisitor or [Hemalurgic] spikes?

This is one of the main things that made Kelsier suspicious, so it is a plot relevant point that (perhaps) I will answer some day.

All right, here you go. There is a very minor plot point [in The Lost Metal] involving a dessicated frog.

Not currently, I'm afraid. This series started life as a short story, though, so who knows.

In RoW was see Kaladin telling Syl that he believes that the Recreance took place not as one event such as fever stone keep, but on an individual basis. This has created many discussions in the fandom about how the spren could have been unaware that they would become deadeye's. Is this because it took people years later to discover how to summon and dismiss shards through an ornementation mishap, and deadeye's weren't seen by the other spren in shadesmar until there was no stopping anyone.

The recreance wasn't something that happened over months, more like days. And the decision was made in the heat of the moment by the spren and their knights.

Will radient spren avoid a bond with anyone who is holding or becomes a dawnshard.

When it is said that Honor started to go crazy towards the end of the Knights Radiant, were those Knights seeing Honor as he was slowly dying, or were they interacting with a Cognitive Shadow of Honor, like how Preservation left Fuzz behind?

In the past we have seen that shards that break oaths are made vulnerable by that. And in Mistborn Era 1, we see that the reason that Preservation was able to be killed was that he tried to shelter humanity against Ruin even though his agreement said that Ruin would be allowed to destroy them eventually. Did Honor have an agreement with Odium or the singers about a potential ceasefire between Desolations that was broken by the binding of Ba-Ado-Mishram or other actions taken by humans between Desolations?

RAFO, but I will say that there was not much of a continuatuion to the fighting after a Desolation. It is similar to if you look at stone age and even modern stone age people. Most of them didn't truly understand war and if they did then they almost never thought to exterminate everyone on the other side. So I don't think that it's likely given how far towards societal destruction they were pushed by each desolation.

What's next for Reckoners [after Lux]? There's always another secret; that's a mantra that I use for my books. I'm not gonna tell you what's next, but there will be more.

So one thing I was wondering about the slug genders, do you know what gender Boomslug is? Boomslug is always described as “it” in the book as far as I can tell, while the others are referred to as “he” or “she” at one point or another.

From what I can tell the characters basically guess/label the slugs as they see fit. I think FM thinks about how Spensa calls Doomslug she but it seemed to be an arbitrary call on Spensa’s part ... I don’t know how close the slugs are to real slugs, but irl slugs are actually hermaphrodites.

They are making it up.

Slug sexuality is not canon, but in my mind they are hermaphroditic, like banana slugs.

Which means they would all be both genders, technically.

Boomslug is tagged male at some point, but I don't remember when.

Oh, Janci, if I can bother you with a question. Is a "season" on ReDawn the planetary year?

I'd need the context. I'd assume a season is a season, but I don't remember how it was used.

Alanik mentions seasons as a measure of age.

Alanik says Quilan is a few seasons older than her, I wonder if it means a few years or less than one.

I'm curious to hear more about the ending

it's a very busy, and a very impactful ending, and it is going to have a different emotional response from the characters than from the readers

we don't feel any parental love towards Jeshua Weight, and she is mostly presented as being not very likeable

but Jorgen, and even the rest of the humans on Detritus, are going to be taking this very differently

Brandon: you know what we should do? Trap the politicians in a ship and blow it up.

Brandon: yeah! Do that! Blow up his parents!

In my head: right before I jump in his POV. That'll be something.

I really like that one [the mystery of Roanoke]. I actually, for a while... You guys are gonna hate me for this, but I, for a while, was gonna have the second Rithmatist novel deal with that. And then I threw that out the window; one of the reasons why the second Rithmatist novel's taken forever is I threw that whole concept. But it was gonna be Lost Colony-focused, for a little while.

Is Elend's symbol on his first new uniform from Tindwyl the Bridge Four symbol?

No, it is not. Tindwyl wasn't very Cosmere aware.

Do the singers/listeners/Parshendi/parshmen have a collective noun?

I haven't really thought about it, but for now they would prefer to be called singers.

In Mistborn, was Kelsier the first person ever to kill a Steel Inquisitor?