The number 10 seems to be a recurring theme in this world. Are the "ten fools" the antithesis of the ten orders of the knights radiant?

Yes, ten is a number of mythological import in the world. The Ten Fools are, essentially, the opposites of the Ten Heralds--who each represented an ideal. (Those ideals were later adopted by the orders of Knights Radiant, so yes, there is a connection--but there's a step between them.)

You snake. I just finished Hero of Ages, and come to find out I'll never know the last 2 metals. Grr.

Cadmium and Bendalloy are what you're looking for. They create bubbles of warped time around the Allomancer. I will be doing more books in the world, though not with the same characters, and you'll see the other metals.

I suppose my question is about how you name your characters. I've been reading WoT and notice some similarities, for example Cenn, and Sarene, and Shalon (different spelling, but they probably sound the same). Is it purely by accident that you have characters with similar names, or is it a homage to a recent master of the fantasy genre? Or is it just that with RJ's 2000+ names, it's impossible to escape some overlap? :) So I guess I'm curious about how you name your characters in general (and even places. Urithiru is an awesome name.)

I ended up with a lot of unconscious similarities in KINGS as I was working on it for such an extended period of time. Cenn wasn't actually intentional. (At least, I don't think so; sometimes, it's hard to remember back to which names pop out intentionally and which do not.) The eyebrows of the Thaylens were, however, an intentional homage, as is the name of the mountains by where Szeth's people live.

There is going to be some overlap. Sarene is a great example of this; I'm pretty sure that one is just coincidence, though I'd lay odds on Cenn being an unconscious influence.

Some of the names in the book were constructed quite intentionally to fit linguistic paradigms of the setting. Urithiru, for example, is a palindrome--which are holy in the Alethi and Veden tongues. Some names, like Shallan, are intentionally one letter off of a holy word--as to not sound too arrogant. (Shallash would be the holy word; nobility will often change one letter to create a child's name to evoke the holy term, but not be blasphemous.)

With many, I just go for the right feel. I've worked these names over for years and years at this point. Dalinar's name has been set in place for a good ten years or so, but Kaladin used to be named Merin and Szeth used to be named Jek. (The first changed because I didn't like it; the second changed because the linguistics of the Shin people changed and I needed a name that better fit.)

[Mistborn] would be AWESOME cinematically, except I don't know how the internal use of the metals and their powers could be conveyed on screen.

The producers have some good ideas for giving visuals on those. Iron/Steel, for example, would make all sources of metal glow faintly blue on the screen while the allomancer is burning.

Behind the scenes: On at least five separate occasions, someone pointed out to me that I'd "forgotten" Gaz, assuming the lack of mentioning what happened to him was a mistake. It was not a mistake.

Unless you are using it to describe a method of divination, X-mancy probably does not mean what you think it means. -mancy, from the Greek manteia ("divination") cannot be used to denote the magical manipulation or evocation of something. The root you are looking for is -urgy, from Greek ergon ("work").

But fantasy books get a little leeway here because it's generally understood that English is being used as a proxy for an in-world language, so Greek etymology doesn't necessarily apply.

And Brandon Sanderson's admitted that he knows what mancy means, and calling his magic system in Mistborn allomancy was simply a useful tradeoff.

Yes, I talk about this in the annotations, I believe.

Language shifts. I believe this one has shifted far enough inside the target demographic (fantasy readers) that it would not confuse. In fact, I decided it would be MORE clear to use the 'wrong' term than the right one.

I subscribe to a school of writing philosophy which believes that clarity trumps most other concerns, so I chose to do it this way. (Though this was a specific choice for the Mistborn world, where I was attempting to create resonance as an Earth analogue, so used more familiar sounding names for people and terms. Compare to Elantris, where I instead preferred in-world names and terms which might be harder to say/pronounce but added worldbuilding flavor.) 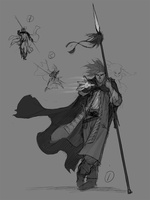 Kaladin Concept Art used in my pitch of the series to Tor in 2008. Done by the incredibly talented Inkthinker, who eventually produced all of Shallan's pieces for the final book.

My god, that is sexy. Did he ever finish it?

He did polished versions of all of the characters, though I prefer not to show them around very much. The reason for this is that I generally prefer the readers to be able to imagine the characters as they have in their own minds, which is why none of the illustrations in the books are actually of characters.

On a more specific note, for this drawing, I've always preferred the rough version to the polished version. Something about the primal energy of this one is stronger. The polished one cleaned up the face, but for this picture, I feel that actually made it worse.

He did finish this illustration, but the sketchy version looks better for some reason. There's also a Szeth concept piece, a part of which ended up in the book as Szeth's chapter icon.

I am hesitant to commit completely [to an Alloy of Law sequel], as I don't want too many open series. That said, I did end this one with more of a cliff-hanger than I had intended. Much that is happening here has relevance to the second trilogy. However, I do think I would be leaving Fans in a bad position if I didn't do more with these characters. It is likely, therefore, that there will be another book--though the second Stormlight book has priority.