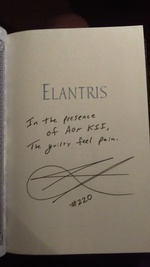 If an Elantrian drew Aon Kii, what effect would it have?

In the presence of Aon Kii, the guilty feel pain. 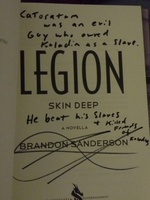 Katarotam was an evil guy who owned Kaladin as a slave. He beat his slaves + killed friends of Kaladin's. 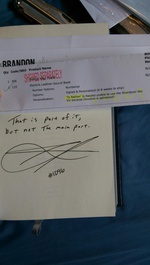 Is Raoden unable to use the Shardpool like Vin because Devotion is Splintered?

That is part of it, but not the main part.

I asked for something about Adolin.

Adolin's entire plot in The Stormlight Archive has been rebuilt because he worked so well in book one. He has a bigger role now.

Can you reveal something about Adolin, however small, that we don't know yet?

Much of Adolin's early sense of morality was instilled in him by his mother. 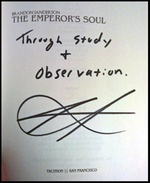 Can you tell me something about how the people of MaiPon came to their knowledge of Realmatic Theory? 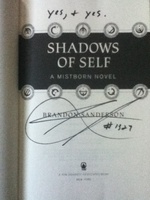 As of Era 2 is the nature of Vin's noble heritage (i.e. her father was a Tekiel before joining the Steel Ministry) known and if so, has House Tekiel tried to capitalize on that fact? 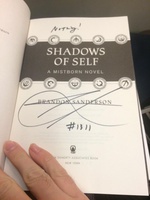 What can you tell us about the Terriswoman Worldhopper that we don't already know? 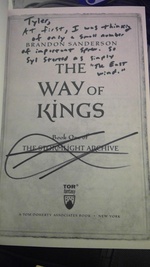 At first, I was thinking of only a small number of important spren. So Syl started as simply "the East Wind". 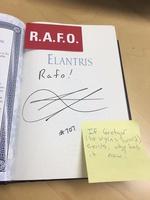 If Gretgor, (1st Wyrn's sword) exists, who has it now? 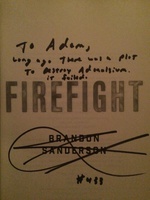 Tell me something about the cosmere that has not been previously mentioned.

Long ago there was a plot to destroy Adonalsium. It failed.

Could you steal any trait Hemalurgically that can be stored Feruchemically?

Yes, you could steal any trait that can be stored.

Who is Kelsier's noble dad?

Kelsier's dad is a secret.

How many Breaths would be fair to turn a mistwraith into kandra-ish?

Turning a mistwraith to a kandra would be hard with Breath. It doesn't give sentience. 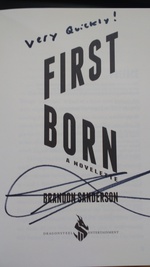 How long does it take for someone who has had four iron spikes in to become a koloss, how fast are the changes?