All your novels are tied together by an overarching magic system, and we usualy see evidence of this in the form of the too-still pools of water. However we did not see any such bodies of water directly in Warbreaker. Is there such a pool in Warbreaker? Is that where the Tears of Edgli grow?

This is speculation that I will neither confirm nor deny.

Vivenna notices the Tears of Edgli here, the flowers that drive Hallandren wealth and trade. I added these in an early draft, as I realized that there needed to be a cheap, easy source for all of those dyes the Hallandren use. (This was pointed out to me by my friend Jeff Creer, I believe.) The Tears offer something else as well—a reason for the wealth of the people. In early times, dye trades were extremely lucrative, and being able to control a method by which unusual dyes could be created would have been a very good basis for an economy.

I also like what it does for the flavor of Hallandren as a whole. This story happens in the place that is, in most fantasy books, far away. A lot of fantasy novels like to make their setting someplace akin to rural England, and they'll talk of distant countries that have exotic spices, dyes, and trade goods.

Well, in this world, Hallandren is that place. It's at the other end of the silk road, so to speak.

I was curious about the dye in Hallandren, the Tears of Edgli. So, that can be used to make a whole bunch of different colors, right? Does the flower come in different colors? Or is that something in the dye process, or-?

The flower comes in different colors.

And it dyes all fiber types the same?

It does not dye all fiber types the same.

In theory, if they had synthetic fibers would it work on them?

I would say yes.

Is it more fuel-efficient for Awakening?

Yes. Those dyes are very effective for Awakening.

Are the requirements for a Shard to Invest in a shardworld what causes the manifestations that we see (spren on Roshar, lerasium/atium/harmonium/'trellium' on Scadrial, and Tears of Edgli on Nalthis) or are these phenomena the by-product (or intentional action) of the Shards' Investing themselves?

What would happen if you made a cup of tea from the Tears of Edgli?

You would have a very interesting cup of tea. 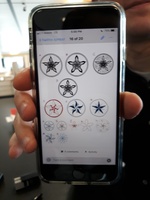 What symbol will be on the Warbreaker leatherbound?

He referred us to Isaac, who showed us several designs which are not finalized, but they are confirmed as Tears of Edgli.