Where'd you get the inspiration for the Shattered Plains?

I can't say specifically, but probably the cliff's in Southern Utah had a large bearing on it.

What shattered the Shattered Plains?

What inspired the Shattered Plains?

Little Wild Horse Canyon and others in southern Utah. That's what inspired the chasms.

What can you tell us about the origin of the Shattered Plains?

Not very much. Read Words of Radiance.

Since I started the thread about outposts and stone bridges, I felt like getting some input there.

Brandon told me that single highprinces could not erect outposts because due to the superior mobility of the Parshendi—they would overwhelm any small outpost quickly. Soulcasting stone bridges is also not plausible. Apparently, they would need to first get the wooden bridge out there, then soulcast it and then, since the stone is heavier than the wood, they would have to reinforce it, e.g. with ropes. These could then be cut by the Parshendi, so it would not help at all. Dalinar with his mobile bridges is on a better track in his opinion. He did say however that several highprinces working together could easily establish outposts in the Plains. He said the competitive nature of the Alethi was doing them a huge disservice in the war and that if they would work together, they could have taken the Plains long ago.

My friend has a theory: The Lord Ruler is the one that Shattered the Shattered Plains. Is that a possibility?

I won't discount it out of hand. Mostly just so that he can keep arguing with you guys. 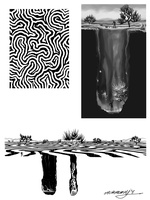 I've spoken before on my creative process. I build books out of good ideas, often developed in isolation until I find the right place for them. (Allomancy and Feruchemy were originally developed separately, for separate books.) When a book doesn't work, the ideas get broken apart and bounce around in my head some more until I find another place to try them out.

Bridge Four—and the plateau runs—were originally part of Dragonsteel. Dalinar was too, so that's not all that surprising, I guess. However, Bridge Four is unique here in that when I decided to move them from Dragonsteel to The Way of Kings, I had already completed both books and felt pretty good about them. They are both important sequences in the Adonalsium Saga, and lifting Bridge Four from Dragonsteel meant taking away its most dynamic, powerful plot structure.

That decision was not easy to make. The problem is, both books were fundamentally flawed. Oh, they were both good, they just weren't great—and I felt I needed to be doing great in this point of my career. (Hopefully during every point of it.) The Way of Kings had an awesome setting and some great characters, but no focal plot sequence that really punched someone in the gut. Dragonsteel had wonderful ideas, but they never really came together.

In the end, I took the best part of the book that otherwise didn't work and put it into the book that needed a little extra oomph. The moment of decision came when Ben McSweeney, who was doing concept art on the book, sent me a concept he'd done that looked shockingly like the Shattered Plains. (Which, remember, were not even on that planet at that point.) I realized that they would fit the worldbuilding of The Way of Kings better than they ever did Dragonsteel, and that I could put greatshell monsters in them.

So, I ripped apart a book I love to make a (hopefully) better book. Rock came along to Roshar for the ride (he was an original member of Bridge Four in Dragonsteel). I added Teft, who had been left languishing for a decade or so after Mythwalker became Warbreaker and he didn't make the jump. Bridge Four seemed like a great home for him.

[Assistant Peter's note: Teft is mostly the same character as Hine from Mythwalker, but also has a character aspect from Voko in that book.]

Why aren't the Shattered Plains symmetrical? This upsets me.