I read that you had said if you had written Khriss' essay on Nalthis, it would have been more or less that she was talking about the magic, and then mention that there were scholars on this planet that were spitting distance from, like…

So, Vasher, and maybe some of the other ones have been off world--

Shashara has been, yeah.

...Are they known to the people at Silverlight? Like--

Know Vasher is a different question than know of Vasher. But they are widely regarded as early cosmere scholars... They are pioneers of this sort of stuff. So yes.

If Vasher and Shashara had Awakened a non-weapon in exactly the same way as Nightblood (say a shield), would the object exhibit the same properties as Nightblood?

So, if you said "destroy evil" to a shield... no, it wouldn't be exactly the same. The Command is the most important part of all of this, but the shape, how the weapon perceives itself, how you perceive it, is all gonna play into this. They're playing with some real dangerous stuff when they made Nightblood. And it didn't go as intended.

Could Shashara have retrieved her Breath from Nightblood?

Not by means she knew. 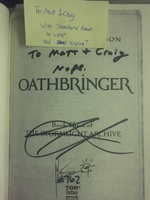 What did you get Matt?

Shashara was not known to wear red scarves.

You said in the Warbreaker annotations that Denth has the Royal Locks separate from being a Returned, as part of the royal line. Does Shashara also have the royal locks?

Um… That would be a valid guess.

I've been wondering for a while whether it is significant that Ash's name so closely resembles Shashara's from Warbreaker?

No, nothing significant there.

Can you give any history on Denth? I don't know what he did as one of the Five Scholars. What was his roll during the Manywar?

Boy, you know, I'd rather leave the history of the Five and the Manywar for the sequel. Denth was there, and at first he tried to stop it, work as a peacemaker, and eventually took Vasher's side. Until the death of his sister.

Is Endowment agreeable with the Nalthesian using her gift to feed the Returned?

What with the deaths of Denth, Shashara and Arsteel - I can't see them giving their Divine Breath away. Isn't this the reason why they Return?

Lightsong Sees the Painting of the Red Battle

This is our first major clue (though a subtle one at the same time) that there might be something to the religion of the Iridescent Tones. Lightsong does see something in this painting that an ordinary person wouldn't be able to. A well-crafted piece of art, made by a person channeling the Tones and connected to them via Breath, can speak to a Returned. Now, in this case, it doesn't work quite like Llarimar says it does—Lightsong doesn't actually prophesy about the black sword in the way the priest thinks. In other words, Lightsong isn't prophesying that he'll see the Black Sword (Nightblood) in the day's activities.

Instead, Lightsong is seeing an image of a previous war, which is prophetic in that another Manywar is brewing—and in both cases, Nightblood will be important to the outcome of the battle.

The person Lightsong sees in the abstract painting is Shashara, Denth's sister, one of the Five Scholars and a Returned also known as Glorysinger by the Cult of the Returned. She is seen here in Lightsong's vision as she's drawing Nightblood at the battle of Twilight Falls. It's the only time the sword was drawn in battle, and Vasher was horrified by the result.

It's because of her insistence on using the sword in battle, and on giving away the secret to creating more, that Vasher and she fought. He ended up killing her with Nightblood, which they'd created together during the days they were in love—he married her a short time before their falling out. That marriage ended with him slaying his own wife to keep her from creating more abominations like Nightblood and loosing them upon the world.

Nightblood is part of a much larger story in this world. He's dropped casually into this particular book, more as a side note than a real focus of what's going on, but his own role in the world is much, much larger than his supporting part here would indicate.

Regarding the sibling relationships of Yesteel/Arsteel and VaraTreledees/Shashara, were either pairing Returned simultaneously? If so, how did they know they were siblings? And do any of the four know their original birth names? Finally, is it coincidence that there are two pairs of siblings in the Five Scholars or is there something more at work?

I do intend to delve into questions like in your first point when I return to that world, so I'll RAFO for now.