I really like how you have different fingernails. *inaudible* Because I barely noticed, rereading for Stormlight, you've got the He--

Horneaters, um.. they're not *inaudible* with Parshendi are they?

That's where they get the red hair then.

I was just listening to Darn Carlin's Hardcore History podcast and Dan Carlin was talking about Genghis Khan's habit of seeing the potential in anyone, even an enemy. He was specifically going over the story of Jebe, a soldier who shot Genghis Khan in the neck and was recruited by the Khan because of his skill. This, at least to me, bears a striking resemblance to the final scene in the first flashback of [Oathbringer]. [Brandon] can you confirm or deny my suspicions that this scene was directly inspired by the real life event?

Yup, that's where it came from! I read a history of Genghis a number of years back, and loved this story, which was included there (though said to be just a legend.) Since I based old-school Dalinar on Subutai, a Mongolian general, I thought that this would be a perfect inclusion.

The origins of the Mongolian-Dalinar link, by the way, can be traced back to a friend of mine, Bat-ultzi, a Mongolian who went about always claiming to be "The Great descendant of the Great Genghis Khan." He'd throw his shoes at people if they offended him. He was such a character that I got very interested in Mongolian practices and history.

More tidbits. Rock and his culture started Mongolian long, long ago. (98-99 era, when I first wrote him.) As Roshar in general (and the Alethi in specific) became more Asian in look and less Semitic (though they are still a mash-up) I decided to push Rock's people in the direction of a human/parsh hybrid strain. This also was part of moving Rock himself from Yolen to Roshar, following after Dalinar and some other characters, who came earlier during the original Dragonsteel / Stormlight split in the early 2000s.

These changes drove the Horneaters away from Mongolian influences, though I can't say specifically where the Polynesian/Russian mashup came from. I liked how it read, and felt the linguistics supported the accent. These changes, of course, had a domino effect that resulted in the Veden people gaining their occasional red hair and fair skin from Horneater relation, which means Shallan is part parshman--though the relation is distant at this point. 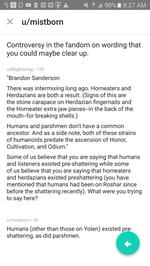 I didn't realize Horneaters had parshmen blood, didn't even realize that was possible. How closely are humans and parshmen related, do they have a common ancestor? Or is one an artificially created version of the other?

There was intermixing long ago. Horneaters and Herdazians are both a result. (Signs of this are the stone carapace on Herdazian fingernails and the Horneater extra jaw pieces--in the back of the mouth--for breaking shells.)

Humans and parshmen don't have a common ancestor. And as a side note, both of these strains of humanoids predate the ascension of Honor, Cultivation, and Odium.

Are there Aimian-Human hybrids as well? (Either type of Aimian) If so, are the Thaylen people one of these?

Humans (other than those on Yolen) existed pre-Shattering, as did parshmen.

I asked if the Aimians as a race were, as I suspected, closer to the Cognitive Realm, and whether they are somehow related to the Parshendi.

Brandon started by saying there are 2 sub races of Aimians for a start, and Axies the Collector is of 1 set, we have yet to meet the other but we will!

He did say there is 'Something' going on with the Aimians and their interaction with the Cognitive Realm but wouldn't elaborate on that point.

He then went on to say that Aimians are not in fact related to Parshendi at all, but the Horneaters and Herdazians are!