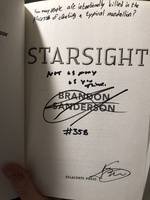 *Written* How many people are intentionally killed in the process of creating a typical medallion?

*Written* Not as many as you think. 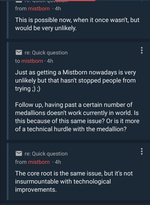 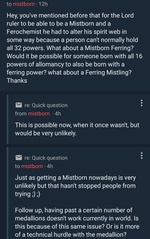 Hey, you've mentioned before that for the Lord Ruler to be able to be a Mistborn and a Feruchemist he had to alter his spiritweb in some way because a person can't normally hold all 32 powers. What about a Mistborn Ferring? Would it be possible for someone born with all 16 powers of Allomancy to also be born with a Ferring power? What about a Ferring Mistling? Thanks

This is possible now, when it once wasn't, but would be very unlikely.

Just as getting a Mistborn nowadays is very unlikely but that hasn't stopped people from trying ;) ;)

Follow up, having past a certain number of medallions doesn't work currently in world. Is this because of this same issue? Or is it more of a technical hurdle with the medallion?

The core root is the same issue, but it's not insurmountable with technological improvements.