For the next year, when we were thinking about The Lost Metal one of the things that we were hoping is that—the same way that we had like a new tiny place which is New Seran on the map—we were hoping that maybe now we will get a bigger map? So we don't know yet, but hopefully.

Yeah! I wonder <like you said> like we were wondering regarding this new map is there any place where we will be able to find mummies on it?

*laughs* You know, Isaac's hard at work on his book. He hasn't let me read it yet, he's not quite finished. But I believe he might have an easter egg—it's really up to him—of where that might be. Close-lipped on what these mummies may be, and what's going on there.

Well well, let's see what the new book brings. And the other thing is because now we are closing this era and we will go into Scadrial—well in the future years we will go into Scadrial in year 3 [Era 3] it's going to be more technological, and since you said now we will have kind of a full map or more complete map of Scadrial, can we hope to see like the whole Scadrial in year 3 [Era 3] because they will have more—

Yes. Yeah we should be able to get the entire world map by then for you.

I've been rereading the earlier Cosmere titles recently, and I was wondering: are we ever likely to see full world maps for these locations?

Yes, probably during next age, or next era. Once we get to modern era, and their mapping technology is to a modern equivalent, you'll start seeing full world maps. I'd love to do globes; I don't know how much interest there is in a Roshar globe, but I've wanted to do that for years. 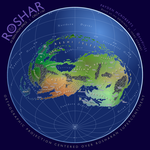 So with the great map in Oathbringer, I was able to update my map of Roshar from space! Enjoy!

As always, thanks to @BrandSanderson, @IzykStewart, and @PeterAhlstrom for making such an inspiring and awesome world.

Did you use the one from the ebook? Also your equator is too high...

Yeah, I made a grid of 100 degrees latitude and 200 longitude, projected it into azimuthal equidistant, and wasn’t quite able to match it to the graticule in the ebook map. I got it as close as I could and assumed your projection was slightly different.

Is the equator supposed to go through the top of Kadrix?

Yes. Through the word Kadrix. I’m guessing the latitude the projection is centered on is a bit off.