The initial premise of Dragonsteel, which you guys will eventually be able to read, is: the King has a bet on whether people from a rural village can be trained to be as smart as people from the noble court. And this is part of the bet. And that’s kind of the initial place that this starts and goes.

Hoid shows up pretty overtly; he’s got viewpoints in this book. He is not hidden at all; you will see him when he comes on screen, and you will know him. I think he goes by “Cephandrius” in this one.

It is no longer Cosmere canon. Nothing in it really spoils too much. It spoils some of the magic system that’ll eventually be part of Dragonsteel, and some of those things. But when I go back to this planet, it’ll be Hoid’s viewpoint. Jerick has basically been written out of the Cosmere; I don’t know that I will ever do a book about him. It’s possible, but there’s so much overlap between his story and Kaladin’s story, now, that I don’t know if I could do it and make it interesting and distinctive. One young and somewhat brooding man raised to be a scholar from a no-name village is probably enough for the Cosmere. Even though there are distinctive different parts, since Kaladin’s father was educated.

ELANTRIS and WHITE SAND have what I would call 'flawless' heroes. DRAGONSTEEL and AETHER OF NIGHT have mostly flawless heroes, with their internal issues being only minor parts of the plot. These four have, from what people have told me, are generally their favorite books of mine.

WAY OF KINGS, MISTBORN (version 1), and FINAL EMPIRE all have heroes with serious emotional or psychological issues that they're dealing with. KINGS is the most daunting of these, with each of the major characters having their own personal 'thing' that they are working through in the book. MISTBORN (version 2) is similar to this (though none of you have read it yet.)

These three books have received mixed reactions. While many people claim to like them, I'm not sure that they enjoyed them as much as the previous set. 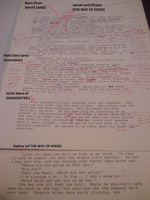 I started writing my first novel when I was fifteen years old. I didn’t have a computer; I had an old, electric typewriter. It would remember your file on a disc, but it was really just a printer with an attached bare-bones word processor. (It had a tiny LCD screen at the top that could display three lines at a time. You could scroll through and edit bit by bit, then you hit print and it would type out the document.)

The book was terrible. It was essentially a hybrid of Tad Williams and Dragonlance, though at the time I felt it was totally new and original. It did have a wizard who threw fireballs with smiley faces on the front, though, so that’s kind of cool. At its core were two stories. One vital one was the tale of a wise king who was murdered by assassins, forcing his younger brother to take up the mantle and lead the kingdom while trying to find/protect the king’s son and rightful heir. The other was about a young man named Rick, originally blamed for the murder.

I still have some of these pages. (Not the entire book, unfortunately.) I used to hide them behind a picture on the wall of my room so that nobody would find them. I was so anxious about letting people read my writing, and was—for some reason—paranoid my family would find the pages and read them, then make fun of them.

Over the years, many ideas proliferated and matured in my mind. I began writing books in earnest (I never finished that one I started as a teenager.) I grew as a writer, and discovered how to make my works less derivative. Most of my ideas from my teenage self died out, and rightly so. Others evolved. My maturing sensibilities as both a reader and a writer changed how I saw the world, and some stories stood the test of both time and internal criticism, becoming stronger for the conflict.

Rick became Jerick, hero of the book now known as Dragonsteel. (It was my honor’s thesis in college, and will someday be rewritten and published. For now, the only copy available is through interlibrary loan, though it appears to have vanished.) Jared, the man who lost his brother and had to lead in his stead, protecting his nephew, slowly evolved into a man named Dalinar, one of the primary protagonists of The Way of Kings. Some of you may be curious to know that the character many now call Hoid also appeared in that ancient book of mine.

These two epics—Dragonsteel and The Way of Kings—have shaped a lot of my passions and writing goals over the last two decades. For example, in my last year of college I took an introductory illustration class to try my hand at drawing. My final project was a portfolio piece of sketches of plants and animals from Roshar, as even then I was hoping to someday be able to publish The Way of Kings with copious in-world illustrations of Roshar and its life. (At that time, I was planning to have an illustrated appendix, though I eventually decided to spread the pages through the book.) Fortunately, I was able to hire artists to do the work in this book instead of forcing you to look at what I came up with . . .

Well, finally—after two decades of writing—Tor has given me the chance to share The Way of Kings with you. They’ve taken a risk on this book. At every juncture, they agreed to do as I asked, often choosing the more expensive option as it was a better artistic decision. Michael Whelan on the cover. 400K words in length. Almost thirty full page interior illustrations. High-end printing processes in order to make the interior art look crisp and beautiful. A piece of in-world writing on the back cover, rather than a long list of marketing blurbs. Interludes inside the book that added to the length, and printing costs, but which fleshed out the world and the story in ways I’d always dreamed of doing.

This is a massive book. That seems fitting, as it has been two decades in the making for me. Writing this essay, I find myself feeling oddly relieved. Yes, part of me is nervous—more nervous for this book than I have been for any book save The Gathering Storm. But a greater part of me is satisfied.

I finally got it published. Whatever else happens, whatever else comes, I managed to tell this story. The Way of Kings isn’t hidden behind the painting in my room any longer.