Did you get to choose Innistrad as the setting, or was that something that was already part of the planeswalker WotC had in mind that your character got merged into?

I got to choose. I had built Davriel most of the way when they said, "Hey, we've got this blank slate planeswalker in our files. Do you want to make this your character?" It worked perfectly, as it let me fill out the lore for this person and have them work as part of the larger narrative. 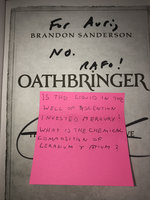 Is the liquid in the Well of Ascension Invested mercury? What is the chemical composition of lerasium + atium?

Were the Whisperers inspired by the card Permeating Mass? Their green color and the way they turn everyone they touch into more of themselves seems too similar to be coincidental.

The Whisperers were actually more inspired by the card Strangleroot Geist. (Though I can't discount the fact that other cards, like Permeating Mass, might have been unconscious influences.)

I knew going into the story that I want green-aligned villains, and so was trying to ask myself what would inspire a group of green geists--and what would motivate them. We've seen green villains in MTG before (the Kami and the Phyrexians both did a good job of this.) I wanted to see if I could approach the color from another direction, and was trying to think of what green would want. It seemed to me that completion, the pieces being gathered to the whole, could be very green--as could the idea of survival of the fittest. (In the form of the Entity putting itself into two souls, and figuring the stronger of the two would eventually consume the other and become its host.)

If the characters were cards, what abilities would you like them to have?

I'd like Davriel to steal cards out of people's hands and then play them. I don't know about Tacenda, though. I've been drawing a blank so far.

What of Davriel had a unique mechanic that read something like; When an opponent casts an instant or sorcery spell, -X loyalty where X is the spell's CMC and exile it with a theft counter (activate any time you could cast an instant), and another that was +2 and return a card exiled with a theft counter to its owner's [hand/graveyard], you may cast a copy of that spell using any coloured mana?

That would be cool, and I would like to see planeswalker cards with odd mechanics. But I think it would be a lot of complicated wording to do something that would, in essence, be very similar to:

Minus loyalty: Look at target player's hand an exile a non-land card from it.

Zero Loyalty: You may play cards exiled with Davriel, and may use black mana as mana of any color to cast those cards.

Maybe Tacenda would have a tap target creatures effect?

When did you first start playing? Who/What got you into it? have you been playing non-stop since then or on and off?

I started in 1994, when my brother brought home a Starter deck soon after Revised had launched. I was hooked from that moment, and have bought packs from basically every expansion since then.

How would your characters fit in your power cube?

I guess it would depend on the cards. But I think I'll get a demonic tutor altered to have Miss Highwater in the art.

It's clear that Davriel is a Dimir aligned character but I find Tacenda a little bit harder to read (my closest assumption it's Boros). If she would be printed in a future which color combinations would she have?

As someone who has studied Asian cultures and history and mythology, would you consider writing a story in the Kamigawa plane? It's one of my favorites but it seems to be a bit underloved, and I'd love to see some more development of it in a story.

I'm a big fan of Kamigawa, and would call Toshiro Umezawa an inspiration for doing a black-aligned hero in this story. So it is something I'd consider.