Another “physics” question: We have the Surges of Cohesion and Tension. And I'm really not sure what the difference is in that.

You'll see when I do this. It's a RAFO. And I play with them anyway a little differently in each order anyway. So what they do... I'll let you figure it out.

It's just like when you enhance the tension of a water surface... (..)

Surface tension is what you're talking about. I'm gonna RAFO. But you're theorizing in correct directions. 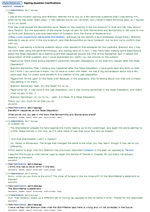 I was at the Houston signing, and Brandon referred me to you on a few technical questions that I was asking him, since he he was quite "brain dead."

First was what Surges the Bondsmiths have. Based on the ordering in the Ars Arcanum in WoR and OB, they should have Tension. But the application of the shared Surge we saw for both Stonewards and Bondsmiths in OB looks to line up more with Brandon's previous description of Cohesion from the Words of Radiance tour. (https://wob.coppermind.net/events/223/#e6061, although he did identify it as a Willshaper Surge there.) Brandon believed it was an error in the Ars Arcanum, and that Bondsmiths do have Cohesion, but he told me to confirm that with you.

What power did you see in the book that Bondsmiths and Stonewards share?

The Shardbearer pressed his hand against the incline leading up to the Voidbringer, and again the stone seemed to writhe. Steps formed in the rock, as if it were made of wax that could flow and be shaped.

"And that Shardbearer I saw? A Herald?"

No. Merely a Stoneward. The Surge that changed the stone is the other you may learn, though it may serve you differently.

Which seems to align with how Brandon has previously described Cohesion in the past, as opposed to Tension.

I assume this Surge is what Dalinar used to repair the temple of Talenel in Chapter 59, but that's not actually essential to the point.

I think this has to be an error in the text.

Sorry, which do you think is the error? The order of Surges in the Ars Arcanum? Or the Stormfather's statement to Dalinar?

I have verified with Brandon that what the Stormfather said here is wrong and will be corrected in the future.