Umm… I'm going to RAFO that.

My question was going to be: I want to ask how Vasher got separated from Nightblood. But that's been RAFO'd.

So I want to ask: ...How did Nale get Nightblood?

That's also part of the RAFO of how he lost it. You can-- No I'm not going to go there.

Is there a spren for the Everstorm?

Has Hoid had a direct interaction with the Nightwatcher at this point. You said he'd be calling her very nasty names?

*nervous laughter* Hoid is… let's go ahead and RAFO that one. 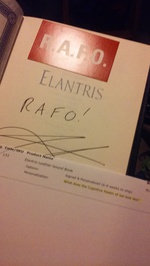 What does the Cognitive Realm of Sel look like?

If you fed a lerasium bead to an Aviar, would it become an Allomancer?

We can see all over history that people with absolute power tend to be quite awful, was Adonalsium like that?

RAFO, good question and you will learn about this

They are not native to Roshar and yet they fit among the Rosharan cremlings so perfectly... So was Rosharan fauna based off of another planet? Or are the crab species on Roshar invasive and from wherever the Sleepless are from? Or are only Rosharan sSleepless made up of crabs because they melded with the local species? Or do living things in the Cosmere evolve into crabs alarmingly often just like in our universe and its a coincidence?

The ones on other planets will look less like cremlings. Realize that a swarm is always evolving. The first swarm's hordelings were more spider-like when it first came to Roshar.

The theme of generations is also a thing we see with the Kandra, who can also disguise themselves. Were the Kandra perhaps modeled after the Sleepless? Or is there any relation at all between the two?

Did Sazed reforge (or have reforged) any atium Inquisitor spikes to use as earrings for Pathians?

What would happen if a copper-compounder would compound copper?

A lot of people have been asking that one. I don't know why they've all suddenly latched onto it, but you are going to get RAFO-ed, but I will give you a card. *laughter* I have reserve something for later books.

What happens if you burn atium at the same time as cadmium or bendalloy?

That would be really cool to see. *laughter* Here you go, you can have a RAFO card.

Here's a Dragonsteel question. If I were to wave Leras' knife over a candle, would it light?

A fanciful picture with animals from mythology. He recognized a few from children's stories, like the enormous mink like creature with the mane of hair that burst out around and behind its head. What was it called again?

Let's answer Adolin's question. Is that a lion. Does this mean that normal animals once inhabited Roshar but became extinct or were forced to adapt after the arrival of Odium or the Highstorms. Or maybe these were artist illustrations from stories brought over to Roshar by worldhoppers? What do you think?

With shardpools being a thing and worldhoppers like Hoid being a thing as well it's entirely possible that people brought stories of the fauna of their world with them when they came to Roshar. After all, we know (via Word of Brandon) that the Horneater lakes are shardpools so they could have knowledge of lions via travelers, seeing them in the pools or some other way (worldsingers?)

Edit again -- They might have gone extinct after the arrival of Odium. If the rest of the world was akin to Shinovar prior to Odium then it's entirely possible for their to have been lions, tigers, and bears (oh my!).

Unless someone asks (or has asked) Brandon then I have no clue.

[Brandon]can you aid us in our questions?

No, it seems like you're asking the right ones.

Can you aid us in getting answers?

I've done so already, by providing two in-depth discussions of the nature of Roshar. They're called The Way of Kings and Words of Radiance.

Could a Feruchemist, by tapping a duralumin metalmind on Sel in Arelon, be able to become an Elantrian? Or would it have to first fill an aluminum metalmind...

Are any of the Lord Ruler's descendants alive during Era 1?

RAFO. A lot of people have asked that. The descendants of the Lord Ruler only are things I've confirmed in Words of Brandon, they are not confirmed in book. RAFO. They did exist, he has had progeny. 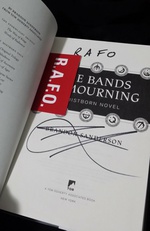 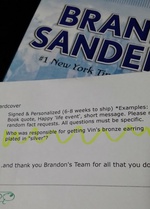 Who was responsible for getting Vin's bronze earring plated "silver"?

Is Hoid going to be Jasnah's Wit?

If Hoid were to hold an unsheathed Nightblood, would he feel sick?

I've read a little bit of Oathbringer and I've been wondering-- is Oroden going to play a bigger role in future installments [of Stormlight]?

Is it kind of a RAFO?

It is kind of a RAFO.

When Lift eats food, does she convert it directly into Stormlight, or some other form of Investiture?

Since the dead spren are said to have been more or less "reabsorbed" into the cosmere, why did they leave behind physical shards at all?

We'll find out more about dead spren as the books move forward.

I was thinking about the Shardplate in Dalinar's first vision and how it looks different than any other plate now.  Would that be like how Syl could only transform after he said that second round... or was it third round of oaths, so is the Shardplate just like the next set, or would that be a totally different set of...?

I'm totally going to RAFO you.  Look you've got a RAFO.  You are asking good questions.

Is that theory correct where, like, the Heralds are basically, like, reversed now. Kind of going against their thing or...

I know, I know. That was my question, which I knew you wouldn't *inaudible*.

I just wanna know more what Szeth and the stone is?

You get-- you get a RAFO card. There you go.

Can Nightblood be Soothed or Rioted? Or influenced by Nergaoul or Ashertmarn, for that case?

But then [Hoid] has to have a flute [to Lightweave], I don't think he had to have the flute? He thought he had to have help [Lightweaving], so he found other things instead of spren. Is that right Brandon?